“AFLW 1.0 was one hell of a ride – I was in awe of our girls, how well they performed in the their very first season of AFLW”

The AFLW inaugural season blew our minds, as this new and exciting competition rocked the Australian women’s sporting world. Fans, players and coaches had their breath taken away. Anticipation for the opening game in Melbourne between Carlton and Collingwood was at fever pitch.

The 25,000 fans that crammed into Princes Park to support a traditional rivalry all became part of a new history. The rivalry however had a twist. This game was officially declared a ‘lock out’ with fans turned away at the gate with no more seats available for those eager to see these girls in action on this historic night. Had the AFL just uncovered a sleeping giant? It seemed that way.

I had quite a few of these moments in my first season as an assistant coach. My best ‘oh my gosh’ moment was our very first training session. I had never seen women play AFL before, let alone seen a training session. This inaugural night completely changed everything for me, with any perceptions I previously held now out the window. First impressions always last and this first session hit me right between the eyes. I was so freaking happy with my new role as an assistant and super-excited to be with a talented bunch of motivated and inspiring women.

The buzz of the first AFLW game turned heads Australia-wide. It was then I had another ‘oh my gosh’ moment. I recall chuckling to myself on the drive home, astounded at what I had just witnessed on TV. I remember this night clearly as it was our last main training session in Brisbane before going to Melbourne ahead of our Round 1 opener against the Melbourne Demons.

It was a balmy Brisbane night and, once training was completed, we piled into a small clubhouse next to our training facility that was fitted with TVs and chairs. I had actually walked into the room a little late, as I was chatting to some other players and staff post-session. As I walked over, I could hear the cheers and excitement from girl watching the game. It was Round 1 and the excitement had seriously gone to the next level as we were all glued to the TV screen watching every moment, the girls cheering and chatting with even more excitement. I think everyone in that room, players, coaches and staff, were completely pumped, eager for the opportunity that was coming our way in a couple of days time.

Our first official game saw us come up against Melbourne on their home turf out at Casey Fields, 45mins out of Melbourne. If you’re not familiar with this part of Melbourne, then lets just say it’s known for its tricky playing conditions. It can become super windy and pour rain within moments.

We went into this game silent and ready to attack. We knew we had prepared well for this first outing. Behind all the media build-up and all the other outside noise of Round 1 was a team of focused women all ready to pounce and attack their first contest. Our girls had trained really hard during their 2-month pre-season campaign, and we could see them gain momentum each week in the lead-up to the season opener.

Our head coach, Craig Starcevich, delivered a speech before the game that ignited everyone in the room. This immediately inspired all of us, giving the girls amazing confidence and belief. The first half of the game was a real arm-wrestle and, with conditions favouring neither team, shifting the football was a real struggle.

Before we knew it, it was half time and we were recharging the batteries in the change rooms. I’m with the forwards trying to contain my excitement, trying to stay calm and motivate my forward line players as they were performing so well. The whole team was doing really well, in fact winning their contests, performing exceptionally well in the horrible conditions. Craig delivered the half time speech to perfection and, in that moment, I believe it made everyone walk that little bit taller adding a spring to their step and fuelling further belief.

Our third quarter was tough and we made it to the Q3 siren with still no team was out in front. The siren sounds and the 4th quarter is underway. It was in this quarter where some interesting scenes took place. The weather conditions continued to be awful, now with an electrical storm brewing. Thunder and bolts of lightning in the distance threatened the game. The officials made a very tough call to stall the game midway through the final quarter. I had never in my time seen a game paused for a storm. Looking back, the officials 100% made the right call, as player safety was top of mind. We gathered in the rooms and stayed calm, awaiting resumption of the game.

After about 5-7 minutes, players take their positions and the game resumes. Our girls managed to dig deep and go up a gear in the final 10 minutes of play. We nailed some great passages of play, scoring two goals, which almost sealed the game, then finally we kicked a third. The game was ours! Our first ever game was tough, it was brutal and it was a slog. The conditions took the pace off the game, yet we rose to the occasion, sealing our first ever victory in this amazing competition against a team touted as the competition favourites.

Our season progressed and our story grew even further. We finished off the home and away season, which consisted of seven games, undefeated. We had a draw in Round 7 against Carlton but, all in all, this season was a huge success. The realisation hit us all that we were serious competitors with a strong and determined group. The effort and attitude displayed by everyone involved in the Lions Women’s team made our home and away season a HUGE success.

The final twist in this amazing story was the AFLW Grand Final. After having an outstanding season, we made it into the Grand Final, giving us an equal shot at the title.

The drama surrounding the Grand Final, about the location of the game, put the AFLW world into a mini spin. However, it was decided it would be played on the Gold Coast at Metricon Stadium. Our opponent, the Adelaide Crows who had also been a powerhouse team in their inaugural season led by captain Erin Phillips, were smashing teams, sending a very strong message.

I wondered during the week if this game would have the hype and buzz of an AFL Grand Final. Sure enough it did…and some. The build-up and the true excitement was something our club and girls will never forget. The game itself proved to be an absolute cracker, as it went down to the wire. Adelaide got off to an electrifying start, kicking some freakish goals, giving them an early lead in the race for the cup. We managed to peg them back, however the sheer pressure of the game made it a serious challenge for us.

We began to build our game and started to get the game on our terms. Fast forward three quarters and we are lined up for the final 15-minute quarter. How would this play out? I was on the edge of my seat in the coach’s box, but I had to stay composed. We all did, as the girls would need us right to the very last second. This proved to be a super intense quarter with moments that could have turned the game for either team.

As the clock ran down, our relentless play was met with the courage of The Crows who managed to stop us from scoring. Likewise, they had some amazing plays yet we stopped them from scoring to keep the game alive and keep us in it. It really was heart-stopping stuff. To see every girl out there throwing her body into each gruelling contest, putting herself on the line on what was a humid Queensland day, inspired everyone watching. Every player out there was running on fumes.

As the final siren sounded, it was The Crows who were triumphant. The Crows hung on to win by one single point, capping off an outstanding first season for them.

As the sun set on that Saturday in March 2017, I thought to myself this new era in sport was now officially born. People like me will be sure to take notice of these amazing new athletes, who will all inspire generations to come. 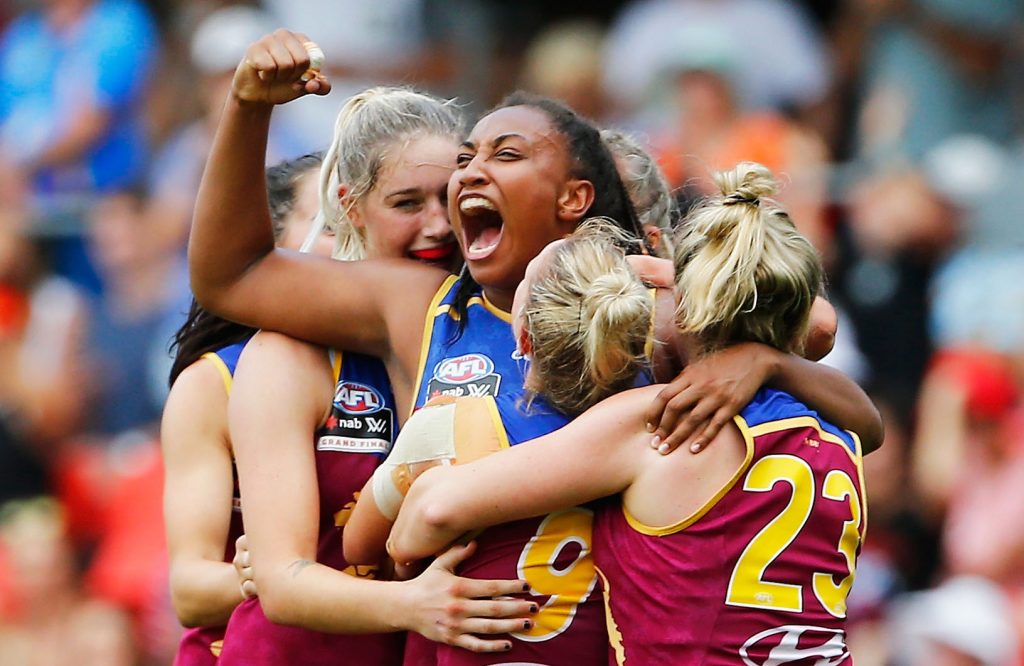 GOLD COAST, AUSTRALIA – MARCH 25: Sabrina Frederick-Traub of the lions celebrates a goal during the AFL Women’s Grand Final between the Brisbane Lions and the Adelaide Crows on March 25, 2017 in Gold Coast, Australia. (Photo by Jason O’Brien/Getty Images) 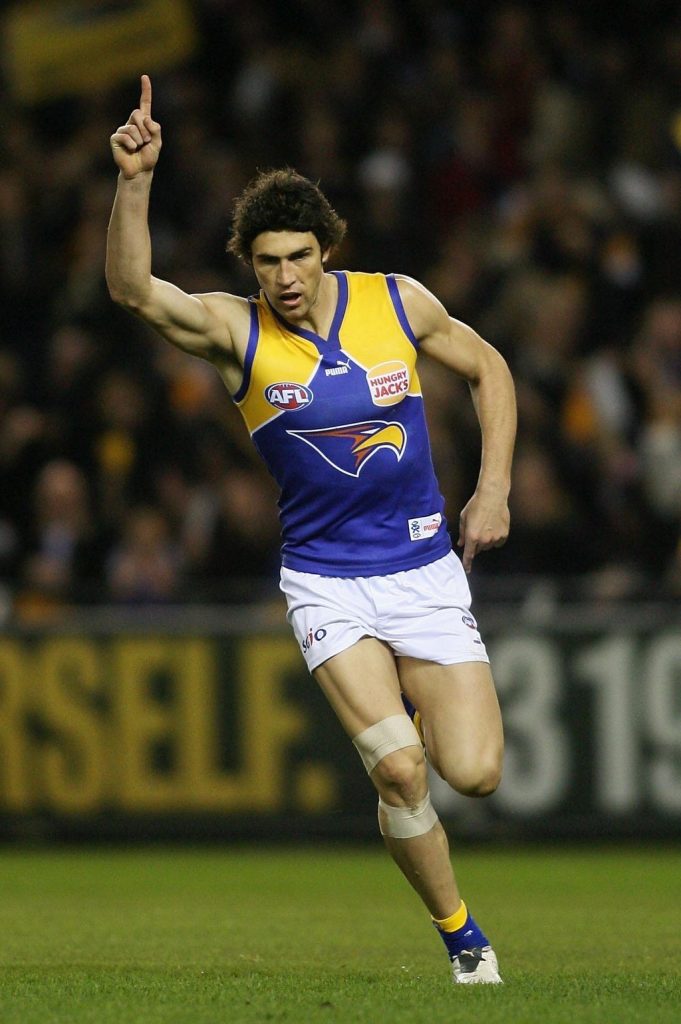 Keep in touch with Stakes 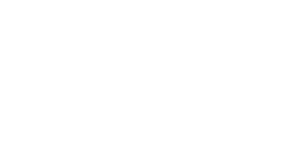 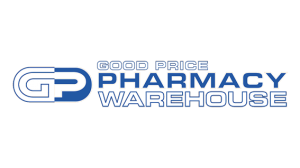